The Mongol rulers were not patrons of the arts like their predecessors of the Song era; they did not set up a painting academy at their Beijing court. This favored the development of an independent literati painting. The works of the versatile master Zhao Mengfu (Chao Meng-fu, * 1254, † 1322) are closely tied to the realistic traditions of the Tang and Song times. The »Four Great Masters of the Yuanzeit«, Huang Gongwang (Huang Kung-wang, * 1269, † 1354), Wu Zhen (Wu Chen, * 1280, † 1354), Ni Zan (Ni Tsan, * 1301, † 1374) and Wang Meng (* 1309, † 1385), were not ready to cooperate with the Mongols; They emigrated as literary painters in an intellectual emigration. A characteristic of her new, unconventional style is a calligraphic conception that emphasizes the individual brush handwriting and ink technique and lets the interest in faithful portrayal of nature take a back seat. At the same time, calligraphy in the form of picture inscriptions that form a unit with the picture in terms of content and form became increasingly important. The widespread use of symbolic orchis and bamboo painting is to be understood as a form of intellectual resistance against foreign rule. The first blue and white porcelain was created towards the end of the Yuanzeit.

The Ming period was generally an era of peace and prosperity, in which many preserved buildings such as pagodas, temples, tombs (Changping), palaces and gardens (Suzhou) were built. Book printing and the printing of colored woodblockprints also flourished; Art connoisseurship and collectors were very popular. Various local schools were formed in painting, most importantly the »Zheschule« (Cheschule) based on the tradition of the Southern Song Academy, named after the province of Zhejiang, with Dai Jin (Tai Chin, * 1388, † 1462) as the main master and the » Wuschule «, which continued literary painting and had its center in the old art city of Suzhou. Your main representatives Shen Zhou (Shen Chou, * 1427, † 1509), Wen Zhengming (Wen Cheng-ming, * 1470, † 1559), Tang Yin (T’ang Yin, * 1470, † 1524) and Qiu Ying (Ch’iu Ying, * around 1500, † after 1552) referred to the landscape painting of the important masters of the Northern Song period (including Su Dongpo and Mi Fu) and the four great masters of the Yuanzeit. They further developed the tendency to simplify natural forms. At the end of the Ming period, Dong Qichang (Tung Ch’i-ch’ang, * 1555, † 1636) excelled as theoretician; Based on the distinction between a northern and a southern tradition of the Khan Buddhist teaching, he classified the painting of previous epochs according to the scheme that was widespread up to the 20th century into a “northern school” corresponding to the academic style of the Zheschule and a “southern school” corresponding to the style of the Wuschule. In the penmanship of the early Ming period, the literary painters Shen Zhou and Wen Zhengming emerged; on the other hand, there were Dong Qichang, Zhang Ruitu (Chang Jui-T’u, * around 1570, † 1641), Mi Wanzhong (Mi Wan-chung, * 1570, † 1628) and Wang Duo (Wang Tuo, * 1592, † 1652) to the important individualists of the late Ming dynasty. – The Ming period, especially the 15th century, is considered the golden age of blue and white porcelain and porcelain with copper red or iron red underglaze painting.

After taking power, the Manchurian Qing dynasty endeavored to legitimize itself through the continuity of Chinese cultural and artistic traditions. Accordingly, a persistent eclecticism was cultivated at the imperial academy.

The Jesuit missionary Giuseppe Castiglione (* 1688, † 1766, Chinese Lang Shining [Lang Shih-ning]), who worked at the court of Emperor Qianlong (Ch’ien-lung), impressed with his realistic horses and dogs portrayed in a mixed European-Chinese style; however, these western impulses had no significant influence on the courtly style. Also among the independent painters such as the »Four Wang«, Wang Shimin (Wang Shih-min, * 1592, † 1680), Wang Jian (Wang Chien, * 1598, † 1677), Wang Hui (* 1632, † 1717) and Wang Yuanqi (Wang Yüan-ch’i, * 1642, † 1715), as well as Wu Li (* 1632, † 1718) and Yun Shouping (Yün Shou-p’ing, * 1633, † 1690), who are considered to be the “Six Great Orthodox” of the early Qing period and who referred to the four great masters of the Yuanzeit and the tradition of the Wu school of the Ming period, was more pronounced Traditionalism. In Nanjing, in the 17th century, he worked with painters such as Gao Cen (Kao Tsen, active between 1643 and 1679) and Fan Qi (Fan Ch’i, * 1616, † after 1694), who had knowledge of the European book illustrations brought by the Jesuit missionaries and experimented with western techniques, another line of tradition. The expressive works of the monk painters known as “individualists” testify to an unconventional painting style and at the same time an intensive examination of nature Shiqi (Shih-ch’i, * around 1610, † 1693), Bada Shanren (Pa-ta shan-jen, * around 1626, † around 1705) and Shi Tao (Shih T’ao, * 1641, † 1717), who, as opponents of the Manchurian foreign rulers, led a worldly wandering life. In the 18th century, the economically flourishing Yangzhou became a new center for painting. Among the best known of the “Eight Nerd of Yangzhou” include Hua Yan (Hua Yen, * 1682, † 1749), Jin Nong (Chin Nung, * 1687, † 1764), Luo Ping (Lo P’ing, * 1733, † um 1799) and Zheng Xie (Cheng Hsieh, * 1693, † around 1775). Her style is characterized by a conscious unconventionality and experimentation with artistic effects. Another eccentric painter of the Qing period was Gao Qipei (Kao Ch’i-p’ei, * 1660, † 1734), who made a successful career in civil service and, as an artist, revived the forgotten expressive finger painting. From the middle of the 19th century, Shanghai became the center of painting. The penetration of the West into China in the age of European colonialism and the confrontation with the militarily and economically superior West in the 19th and 20th centuries resulted in a cultural crisis that led to uncertainty in all areas of art.

In the field of porcelain production, high quality can be recorded especially for the Kangx era (1662–1722). In addition to blue and white porcelain, there was the opaque biscuit ware (Famille jaune). In the Yongzheng era (1723–35), the predominantly red and pink tones of enamel decor (famille rose) were popular. In the 18th century, the monochrome porcelain reached a very high level (Sang-de-bœuf, Blanc de Chine, Celadon). Chinese porcelain has been a collector’s item in Europe since the 17th century and was imitated in European factories (Chinoiserie). In China, a country located in Asia according to historyaah.com, (mainly in Jingdezhen), export goods had been produced on behalf of the East Indian companies since the 18th century, but the quality of the goods lagged behind those made for imperial needs. Porcelains with European shapes and motifs were created (ancient myths, Christian motifs, genre materials, historical scenes, portraits, coat of arms porcelain). 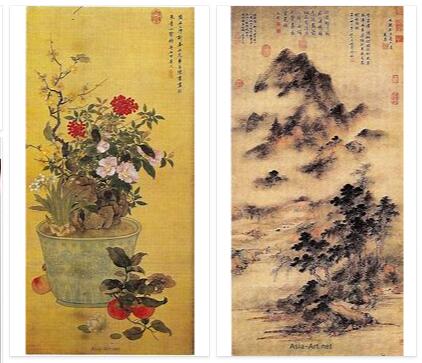