From an economic point of view, Togo is one of the poorer countries in Africa, but it has an extraordinary wealth of cultural diversity. First of all, the writers and theater makers, the musicians and dancers and the representatives of the visual arts, who have achieved an international reputation far beyond the borders of Togo, should be mentioned here.

According to philosophynearby, the Togo Encyclopédie or Mivapedia is an interactive online encyclopedia that provides information about people from history, politics, art, literature, music, etc.

The Koutammakou region, the land of the Batammariba (also called Tamberma) in the north of Togo (and Bénin) with the fortress-like mud castles, has been included in the UNESCO list of world cultural heritage and other cultural monuments and nature protection zones have been proposed for inclusion. The governor’s palace, built in the German colonial era, is currently being extensively restored and is intended to serve as an art and cultural center. A museum for the Afro-Brazilian cultural heritage is planned in Aného.

In the last few decades, the sculptures of the Moba and other peoples of Northern Togo have received an enthusiastic reception from European collectors. The private gallery Ousmane in Lomé, which offers traditional wood carving from West Africa, celebrated its 40th anniversary.

Primarily in Lomé, a lively and interesting theater and dance theater scene has developed. In October 2015, the Togolese Ballet Festival took place in Lomé for the second time.

One of the outstanding theater directors is Koriko Amoussa, who now lives in the USA, where his play ‘When the Bird takes Flight’ (Quand l’oiseau s’envole) was also performed. The actor and director Banissa Méwé is referred to as the soul of Togolese theater, while actor and dramaturge Gustave Akakpo slips into the shoes of Nicolas Sarkozy. Concert parties inspired by Ghana and Nigeria are a popular form of folk theater. The former director of the Togolese national theater Sénouvo Agbota Zinsou now lives in Bayreuth.

In recent years, several theater festivals have established themselves in Lomé, such as the Filbleu Festival and the Festival international de théâtre et d’arts plastiques (FITAP).

Lomé is not only one of the largest markets in West Africa for fabrics, but also offers couture services to buyers in numerous tailoring studios. A few have made it into haute couture. Abass Tchakondo, male photo model, founded the fashion and model agency Allure and started the fashion festival Carrousel à la Mode. The fashion designer Nini Nicoué alias Ayanick founded her own school for fashion and organizes fashion shows. Laëtitia Ewagnignon Akibodedesigns and produces jewelry and fashion accessories and has meanwhile established her label ÊKÂBÔ Création in Paris. The fashion designer Félicité Donyo was able to successfully assert herself with her label for children’s fashion in Canada. The Belgian-based fashion designer with Togolese roots, Fall Touré, was a guest at ‘Look’, Schwerin’s largest fashion event.

The National Museum in Lomé shows musical instruments and objects of folk art from Togo. Regional museums with ethnographic objects or collections are located in Aného, Kpalimé, Atakpamé, Sokodé, Kara and Dapaong.

A very popular game in Togo is Adidada or Awélé, in which two players place pieces in wooden hollows (online version of the Awélé game).

In Lomé, in the Quartiers Populaires, and in many other places, dances that are very popular and neighborhood often take place on Sunday afternoons. In every region every year, impressive traditional folk festivals take place in all of Togo’s larger towns, many of which are also harvest festivals. As part of the initiation rites for the young Kabyé men in the Kara region, the Evala wrestling competitions take place every year. In a radio broadcast, you will learn interesting facts about the funeral ceremonies and dances of the Kabyé in northern Togo, where the Tislim festival is also celebrated in Kanté. In 2007 Yassih Weyenema, one of the most famous griots, died in Kpagouda. Funerals take place

especially in the south of Togo With extremely elaborate accompanying ceremonies lasting several days, an extremely important role in which the families often have to go into debt. Obituaries therefore have an important place on the radio and in the press, and recently also online and on Facebook. Fantastic coffins that remind of the essentials in the life of the deceased are not only produced in Teshie / Ghana, but also in Lomé and some other places in the Préfecture du Golfe. 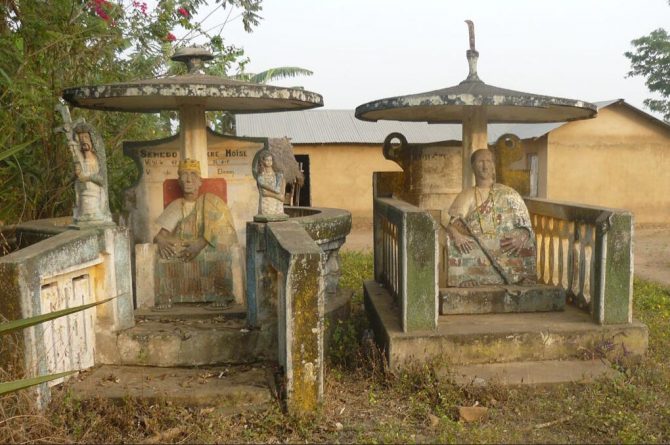