Togo can only produce part of the electricity it needs itself and is dependent on electricity imports from Ghana and the Ivory Coast. The government has ambitious plans for the country’s energy supply. A nationwide power supply is to be achieved throughout Togo by 2030, 50% of which will be from renewable energies. Currently around 80% of the energy requirement is covered by wood or charcoal, only 3% could already be covered by renewable energies in 2018. Investments are now to be made primarily in solar energy.

From 2010 to 2018, the electricity supply increased from 23% to 45% of the population, with only 8% falling in rural areas. To change that, the government launched the CIZO project in 2017, which aims to give another 2 million people in Togo access to electricity by 2022. The electricity network is to be further expanded and supplemented with decentralized energy supply through photovoltaics.

The total cost of the planned measures is estimated at 1.5 billion euros, half of which will be borne by private investors. The project is mainly supported by the Banque Africaine de Developpement (BAD), the World Bank and the European Union. Several international companies of solar energy have settled the result already in Togo. The Agence Togolaise d’Electrification Rurale et des Energies Renouvelables (AT2ER) provides information on the current status and progress.

Originally it was non-governmental organizations and private initiatives, including some from Togoers who live in Germany, who introduced solar energy in Togo. In recent years, Togolese businesses and companies have also established themselves that offer solar panels and the corresponding solar-powered devices and services. Togocel, the largest mobile communications provider, has already been able to reduce its total operating expenses by 60% with a hybrid power system (consisting of a solar system, a diesel generator and an emergency battery). A pilot project plans to equip schools in rural regions with solar energy and a Togoer presents his idea of a ‘Smartbag’, in which a laptop can be recharged with solar energy and an engineer developed a new fuel from the residues of cassava, cashew fruits and sugar cane. 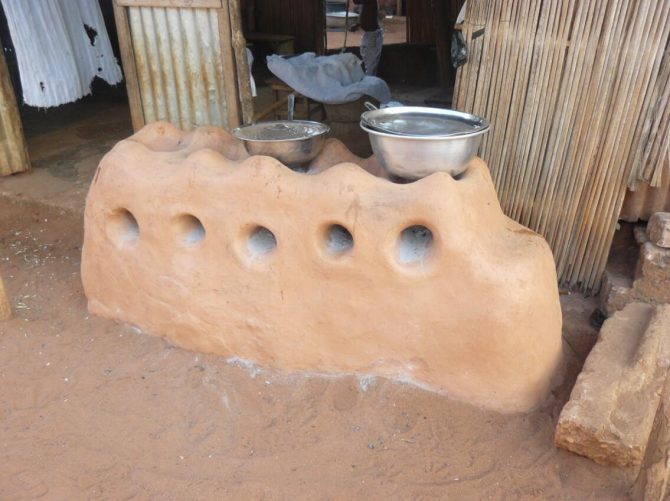 In an international comparison, this sector has so far been of minor importance. Cement production, which is operated by the companies Wacem and HeidelbergCement, takes first place in terms of export earnings. The latter opened a second plant in northern Togo in July 2017. Before that, the building materials company built a clinker plant in Tabligbo and a cement grinding plant in Dapaong for around 250 million US dollars. The Chinese company CDI took over the construction work. According to homosociety, HeidelbergCement is the largest German private investor in Togo.

The phosphate production has achieved more than half of export earnings in the 1990’s. In 2002 it was partially privatized, but mismanagement and corruption led the company into crisis. The Société Nouvelle des Phosphates du Togo (SNPT) was founded in May 2007. Nevertheless, it did not succeed in helping the company to recover, which is also due to the fall in world market prices. In 2014 it fell by 24%. In 2015, the Israeli company ELENITO was awarded the contract to develop a project for phosphate mining and fertilizer production. The governmentis accused of having sold the phosphate below the normal price in recent years and, above all, having enriched himself with two foreign family clans. In 2018, the local company TFC secured three additional mining licenses for phosphate in Kara in northern Togo.

In 2006, MM Mining, an Indian company based in the Bahamas, received approval to mine iron ore in Banjeli in northern Togo. After a break of more than 80 years, iron ore is being mined industrially. In Nayega, about 30 km southeast of Dapaong, the Australian Keras Resources (formerly Ferrex) obtained the 85% license for the mining of manganese oresto back up. The Pomar company, which mines marble near Pagala, intends to invest 100 million euros over the next ten years.

In April 2016, the President opened a Chinese factory in Notsé to assemble motorcycles.

About the restructuring of ailing companies and companies such as B. the cotton company SOTOCO, which in January 2009 was transferred to the Nouvelle Société Cotonnière du Togo (NSCT) reported, including Jeune Afrique.

The food processing and beverage industry consists of a flour mill, edible oil factory, brewery, a factory that fills palm wine into bottles, sugar refinery, plants for processing dairy products, frozen products such as chickens, shellfish and fish, meat production and organic dried fruits. Togolese cocoa farmers, who organized themselves into a cooperative, developed a heat-resistant chocolate that is ideal for the tropical temperatures, as it can be stored without a refrigerator.

Many of these businesses were incorporated into the Société d’Administration des Zones Franches (SAZOF) free trade zone, founded in 1989.low. With around 4,000 employees, the Korean synthetic hair factory, Amina, is the largest employer in the free trade zone. In May 2012, the new information service eRegulations Togo was founded for the free trade zone.

The working conditions in industrial production and in the construction sector are often catastrophic, and accidents occur again and again. During the expansion of the airport by the Chinese company Wuitec, there were work stoppages and massive protests by the Togolese workers, as had previously happened at the Indian mining company MM Mining in Bandjeli. German companies are, with a few exceptions such as Heidelberg Zement or the building materials manufacturerKnauf, rather reluctant to invest.

On the real estate market there are some ambitious construction projects for future luxury apartments in exclusive districts – Wellbeing City, Ville Nouvelle – Lomé / Togo in the north of Lomé – for which investors are still being sought, as can be seen in the film clip and the brochures.

But the state is also active in the real estate sector and wants to build a thousand social housing for state employees.

In the 15 years of the suspended international cooperation, tourism came almost to a complete standstill. Togo, however, has tourism potential that could do justice to a more upscale individual tourism. The government is looking for partners, including in the air transport sector, to stimulate tourism again. A study also reveals some weaknesses in Togolese tourism. The Conseil mondial du voyage et du tourisme reported that almost 80,000 people in Togo are employed in the tourism sector, around 8,000 directly and 72,000 indirectly. In 2018, Togo recorded 712,000 tourists, including business people and visiting Togoers who otherwise live abroad. 48 billion FCFA were officially generated with this, whereby the state does not record all income. In 2015, the tourism and travel industry already contributed 4% to GDP, and the trend is rising. In 2019 Togo was represented for the first time at the World Travel Market in London. Due to the Covid-19 pandemic, this income will collapse almost completely.

The largest hotel in the capital, the Hôtel 2 Février, was once built by Eyadema Gnassingbé at state expense and transferred to the Libyan holding company ‘Libyan African Investment Company’ in 2006. In November 2014 it was nationalized again and, after extensive renovation work, opened in November 2015 as a five-star hotel under the new Radisson Blu seal. However, restarting the hotel proved difficult once again.