Because of the serious human rights violations of the Eyadema regime, international development cooperation with Togo was suspended for almost 20 years. Eyadema’s son Faure Gnassingbé has ruled the country since 2005. His main goal after taking power was to regain international support for Togo’s development. In 2007 the European Union resumed its cooperation with Togo as part of the 10th European Development Fund. In the 11th European Development Fund for the period 2014-2020, Togo is also one of the recipient countries. France and Germany coordinate European cooperation with Togo. The Agence Francaise de Developpement (AFD)was one of the few actors active in Togo between 1990 and 2005, when the international community largely turned away from the military dictatorship. In the last 10 years France has implemented projects worth € 300 million.

Germany resumed government development cooperation in 2012. As a result, the Society for International Cooperation (GIZ), as the implementing organization for technical cooperation, has again been represented with its own country office in Togo since the beginning of 2013. The Kreditanstalt für Wiederaufbau (KfW) as the implementation organization for financial cooperation opened its office in Lomé in 2016. Since the resumption of cooperation, a total of 193.2 million euros have flowed from Germany to Togo, the equivalent of around 126.7 billion FCFA. The agreed priorities with the Togolese government are:

In 2016, Federal Development Minister Gerd Müller announced that he would intensify cooperation with Togo, with a focus on economic development. With the “Marshall Plan with Africa”, the German government is focusing on promoting private investments by companies. Under the German G20 presidency in 2017, the “Compact with Africa” initiative was launched and brought to life. Twelve African countries, including Togo, are to be additionally supported by the program in building up the private sector, whereby the main aim is that German companies gain a foothold in the countries. The African countries were able to apply for the program with economic reforms. Togo is one of the countries eager for reform and is orienting its market heavily towards private investors and foreign corporations.

In addition to the Federal Development Ministry (BMZ), other German specialist ministries are also active in Togo. The Federal Ministry for Research and Education maintains an extensive research center in Togo on climate change and land use (WASCAL). The Federal Environment Ministry is funding a program for nature conservation on the Mono River in Benin and Togo. The Federal Foreign Office finances programs for emergency aid and the promotion of human rights.

According to internetsailors, The World Bank also re-engaged in Togo in 2008 after the demands on the International Development Association (IDA) had been clarified. For the period 2017-2020, a Country Partnership Framework (CPF) was developed to help Togo achieve inclusive and sustainable growth. To this end, the private sector is to be further promoted and the effectiveness of public investments and services improved. The strategy focuses on strengthening governance, institutions and accountability in three areas:

The International Finance Corporation (IFC) strategy in Togo focuses on projects in the areas of agriculture, infrastructure and production and comprises 330 million US dollars. Partnerships with local banks are sought to finance the projects in local currency. The IFC develops products for the microfinance sector for small and medium-sized enterprises and aims to improve the investment climate. To do this, it provides technical assistance to support reforms that are intended to facilitate private investment. As a result of this cooperation, Togo has improved from 150th place in 2016 to 97th place in 2020 in the World Bank’s Doing Business Report.

The establishment of a company was made easier by a central contact point and the abolition of the operator card. Togo has also privatized a number of public organizations, including an insurance company, two banks, hotels, and electricity and container handling companies.

The condition for international support is macroeconomic structural adjustment programs to regulate the state budget and public debt. Governments are being forced to take appropriate austerity measures, mostly in the already severely underfunded areas of health and education. The social consequences are far-reaching and one of the reasons for criticism of the policies of the international financial organizations (IMF and World Bank) against countries in the Global South.

The portal of the United Nations and the sub-organizations that are represented in Togo provides information about the projects and offers reports as downloads. The United Nations Industrial Development Organization – ONUDI adopted a new framework agreement with Togo. In the 11th European Development Fund, Togo is also one of the recipient countries. The ‘Délégation de la Commission Européenne auprès de la République Togolaise’ offers news and reports on its homepage, also as PDF files.

Other important partners of Togo in the field of development cooperation are France, China, Japan, some Arab states such as Kuwait and Egypt, but also Israel, where the President has already made several state visits. During the visit of President Faure Gnassingbé, the People’s Republic of China granted loans for the expansion of the airport and for the construction of the Adjaralla dam as well as partial debt relief, thereby emphasizing the South-South cooperation between China and Togo. Also in air traffica cooperation between China and Togo was agreed. Japan plans to spend 15 billion francs CFA on a new fishing port.

The transfer of funds from abroad by Togoers was more than $ 423 million in 2017, accounting for around 9% of GDP. According to a government report, two million Togolese live outside Togo.

The Weltwärts volunteer service sends young volunteers to projects in Togo through various organizations. There are a number of blogs on the Internet with subjective reports on the use in Togo.

The Goethe-Institut, which was badly damaged by an arson attack in April 2005, has been able to resume its work without restrictions since September 2006 after the Togolese government paid for damages. In addition to the German lessons and the cultural program, it looks after the Togolese German teachers and three German PASCH partner schools. The DAAD financially supports a German lecturer from Germany, who teaches in the German department of the Université de Lomé and provides study and scholarship advice for Togolese students and scientists from all faculties who want to study or research in Germany. 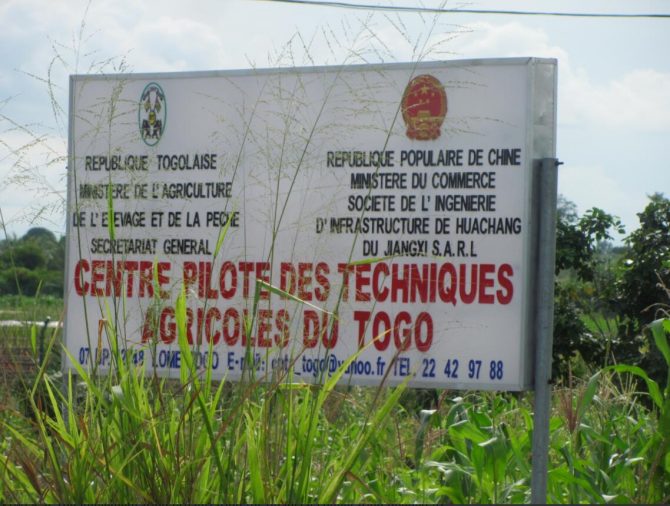