With the national conference that took place in 1991, the media landscape changed suddenly and a large number of media replaced the exclusively state-controlled media. Although a new press law was introduced in 2004, independent reporting has improved significantly under the new President Faure Gnassingbé, but it continues to be threatened by government restrictions. On the world ranking for press freedom published by Reporters Without Borders, Togo improved significantly after the death of Eyadéma and in 2020 it is ranked 71th out of 180 countries examined. The American Freedom House continues to classify the freedom of the press in Togo as ‘partly free’.

Reporters Without Borders expressed concern about the strengthening of the power of the Haute Autorité de l’Audiovisuel et de la Communication (HAAC). Reports of censorship and bans by the private Togolese press by the HAAC appear again and again. On February 19, 2013, the Assemblé Nationale passed a new organizational law that grants the HAAC – in an unconstitutional manner – extensive powers (ban on newspapers, suspension of radio and television programs, withdrawal of approval for audiovisual media), which, based on the Togolese constitution, is a matter for the courts alone. Le Patronat de la presse togolaise (Ppt), one of the two employer organizations in the media sectorin Togo, distanced itself from the Observatoire togolais des médias (Otm), as it is increasingly assuming the role of a tribunal in the self-regulation of the private press. The ‘Code de bonne conduite du journaliste’ introduced before a presidential election is heavily criticized by the Ppt. A new criminal law for the press, which provides for fines and imprisonment for ‘false reports’, unsettles journalists.

The participation of President Faure Gnassingbé in the demonstration for the murdered journalists by Charlie Hebdo met with heavy criticism from the opposition, as he should better work for freedom of the press in his own country.

According to estatelearning, the Togolese journalist and human rights activist Fabbi Kouassi won the “Reporters Without Borders Award” 2013 with her blog. 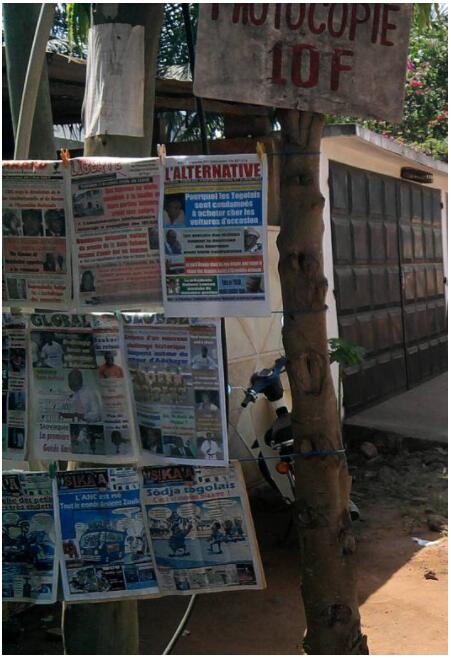 The press landscape offers a wide range of print media, all of which appear in French. In May 2016 there were 413 registered newspapers and magazines, as reported by the ‘Observatoire togolais des médias’ (OTM). However, they are characterized by low editions and are rarely distributed outside of Lomé and some other cities, mainly in the south. The Togo state press, the only daily newspaper, also has half a page each with news in Ewé and Kabyé. The government is issuing a new PR ‘high gloss’ magazine, Les deux palais, named after the two presidential palaces.

A successful person is the media entrepreneur Claude Grunitzky, Great-nephew of Nicolas Grunitzky, who, among other projects, runs a successful music TV station. The free city magazines Togo Couleurs and Lomé City Mag were founded a few years ago and are financed by advertisements. In March 2014, a new magazine ‘Tendances Togo’ was published for the first time, which is intended to reflect the new developments in Togo as a modern and dynamic country. The government is obviously interested in modern and professional reporting, because the Minister for Communication, Culture and the Arts invited journalists to a seminar on the professionalization of the press in the summer of 2014.

The state broadcaster Radio Lomé is also present with news on the Internet and Radio Kara provides the north with news and entertainment. In addition to the five state radio stations, there are 75 private and three international radio stations. Nevertheless, the supply of news and entertainment inland is partially inadequate. The private diaspora broadcaster FM Liberté has offices in Lomé and Kara.

The French group ‘Canal +’ presented the new program 100% africaine, A + in October 2014. The most popular foreign radio stations include Africa N ° 1 from Gabon and the French RFI.

The Canadian media portal ABYZ offers links to magazines that regularly report on Togo. The state-run Republicoftogo.com has developed into a professionally made and quite interesting magazine and also offers news as video films. The French magazine Jeune Afrique compared in August 2014 placed the government websites of 40 African countries and the ‘republicoftogo’ in the first place, essential aesthetics, ergonomics and easy to handle navigation were. The government uses social networks like Facebook and Twitter.

In addition to those of the opposition parties UFC and ANC, there are several online magazines that describe themselves as oppositional and / or independent. Two of them are letogolais and icilome. The online magazine Togozine has focused its reporting more on social issues while BN&N also wants to reach the Togolese diaspora. The headquarters of the online news magazine ‘ afrikaexpress.info ‘ has been closed by the media authority HAAC.