Togo has a presidential multi-party system with President Faure Essozimna Gnassingbé (UNIR) at the head of the state. He was re-elected for another five years on April 25, 2015.

Constitution and separation of powers

With the constitution of October 14, 1992, revised on December 30, 2002, the legal framework for a democracy with separation of powers, a multi-party system (as early as 1991) and general civil and human rights was installed. The president has executive power and is also the commander in chief of the armed forces. He is elected for five years. In December 2002, an amendment to the constitution was tailor-made for the president, including reducing the minimum age for a presidential candidate to 35 years. The Togolese constitution is also available as an Android app.

The prime minister and government are appointed by the president; the prime minister must belong to the majority parliamentary group of the Assemblée Nationale, whose 91 members are also elected for five years. China has built a new parliament building that opened in June 2018.

On September 28, 2020, Victoire Tomegah Dogbe was appointed Prime Minister. She replaces her predecessor Sélom Klassou and leads the new government in the course of the presidential elections in March 2020. The formation of the new government was delayed due to the Covid-19 pandemic. Victoire Tomegah Dogbe is the first woman in Togo’s history to be appointed head of government. The 60-year-old politician was previously minister of youth and chief of staff of the president.

According to the 1992 constitution, members of the government must declare their assets before taking office, but this never happened in the past, until in July 2015 Togolese citizens from home and abroad asked the President of the Constitutional Court to respect it in an open letter. A ranking by the World Bank evaluates the quality of politics and institutions in the countries of Sub-Saharan Africa, with Togo ranking 23rd out of 38 in 2018. 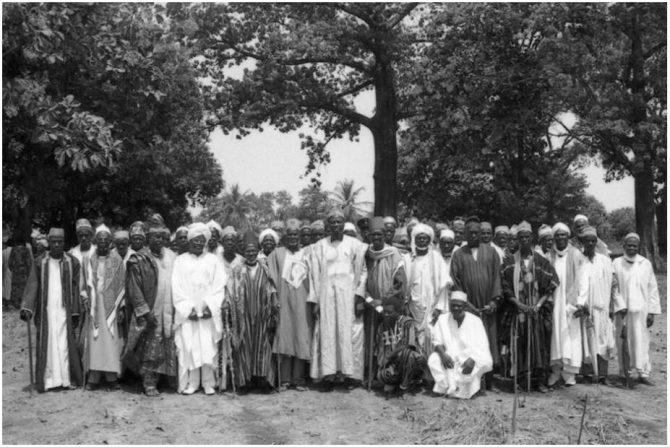 Following the French model, Togo’s administrative structure is centralized towards the government.

A decentralization process is planned by the government and is supported by the UN, international organizations and GIZ. In the reforms, the municipalities are to be helped with international participation to achieve more autonomy and sustainable development. Local elections were held for the first time since 1997 in June 2019.

Using the example of the city of Sokodé, the commune’s communications officer reports how civic participation can now be achieved interactively with radio and mobile phone.

Togo wants to build a modern, efficient, responsive and population- oriented administration, as Elliott Ohin, Minister for State Reforms and the Modernization of Administration, ambitiously announced. The Minister for Post and Telecommunications is committed to Internet-based administration. A study commissioned by the government and published in August 2015 shows that Togolese are extremely dissatisfied with the public service facilities.

The constitution guarantees the independence of the judiciary, but the judiciary is in fact subject to political influence. The legal system was shaped by French (Code Civile / Napoléon) and traditional African jurisprudence. The highest authority is the Cour Constitutionelle (constitutional court). Important judicial bodies for civil and criminal proceedings are the Cour Suprême (Supreme Court), two appellate courts, courts of first instance and the ‘Cour de Sûreté de l’Etat’ (State Security Court). The death penalty was abolished on May 28, 2009. You can find legal texts on the website of the American Law Library of Congress. There has been an audit office since 2009, which was already provided for in the 1992 constitution, but was not installed until 2009.

Following the French model, there are two executive bodies, the police assigned to the Ministry of the Interior and the gendarmerie under the authority of the Ministry of Defense. Under President Faure Gnassingbé, the police were restructured and given a new statute. A new police school was opened in Davié. A poll by Afrobarometer showed that a large part of the population distrusts the police. Bavaria supports Togo in training the police.

In the rural milieu, the traditional case law continues to exist, in which the village chief or council of elders is authorized to judge minor criminal or civil cases. The position of traditional leaders was enacted by law in 2007, but their power and influence seem to be waning. Cases of vigilante justice can also occur, for example if market thieves are caught red-handed.

Laws protecting inheritance and property rights are flawed and have limited enforcement. The relationship of land ownership is particularly inadequately regulated, not least because traditional and modern law coexist there. Most agricultural land contracts are still oral. Only about 36% of the arable land is owned in such a way that it offers long-term security. Land disputes are extremely common: 80% of court cases concern land tenure issues. A new law was passed in 2018 to stop land expropriation. Despite legal regulations, however, contracts are often difficult to enforce.

In November 2015, after years of advocacy by human rights organizations, a new criminal code was passed. It strengthens protection against gender-based violence and discrimination based on gender, ethnic origin, religion and other factors. However, the new legislation has tightened the penalties against people in same-sex relationships. In 2016, a law on the protection of refugees was passed.

For years, international politicians and organizations have called on the government to ratify the Rome Statute of the International Criminal Court (ICC), which Togo has not yet acceded to.