According to the Human Development Index – HDI from 2019, Togo ranks 167th out of 188 countries and – as in most rankings – has declined in recent years. Factors such as poverty, inadequate health care and poor education are still characteristic of about two thirds of the population, especially in rural areas. The IMF speaks in its latest strategy paper on poverty reduction of 58.7 percent of the population living below the poverty line. In rural areas, 3 out of 4 households are poor, compared to 2 out of 4 in urban areas. The savannah region with 90.8%, the central region with 80.2% and the Kara region with 68.4% are hardest hit. In addition, poverty goes hand in hand with malnutrition, with 64.2% of these people living in poverty being undernourished.

Even if the gap between rich and poor is mainly reflected in Lomé, social classes seem to play a smaller role compared to other countries. First and foremost, most people feel that they are Togoers and only then that they belong to their ethnic group or regional origin. One might think that the decades of government repression and widespread poverty in the country have contributed to social cohesion.

Although the state is barely the size of Baden-Württemberg and Hesse combined, there is hardly any infrastructure in the interior of the state. For decades, the government has been obstructing decentralization steps in order to conveniently rule the entire country from Lomé. The fact that the rural population is left to its own devices is also the reason why 73% of farmers are affected by existential poverty. In comparison, it is only 28% of those employed in the public sector and 49% in the private sector.

In Lomé, on the other hand, you can see change and progress in recent years. The big problem, however, is that only a small upper class can benefit from it, while the majority of the population is not included in the thriving part of the economy. The informal sector remains for them to survive, as there are no jobs available, especially for the young population. Around two thirds of all academics do not find a job.

At the beginning of 2017, the government announced that the unemployment rate in Togo was only 3.4%. The 65% of the population who make a living from subsistence farming and all respondents who stated that they were earning money were excluded. This information does not in the beginning reflect the situation of the Togolese labor market, but the method of the government to disguise the situation in their own country and to profile itself. A realistic unemployment rate is between 20 and 30 percent, assuming underemployment in 70 to 90 percent of the active population. 20,000 people applied for a government job advertisement for 2,000 teachers at the end of 2018.

In the world risk report of 2018, Togo ranks 44th out of 171 countries worldwide and is therefore one of the countries with a high disaster risk.

Further figures and statistics on the social situation can be found on the World Bank website and the UN-Data website.

The Afrobaromètre for Togo notes a great discrepancy between the Togoers and their priorities and those of the politicians. Political scientist Renate Helm has written a book about political rule in Togo and the problems of democratization, which are decisive for the precarious social situation in Togo. 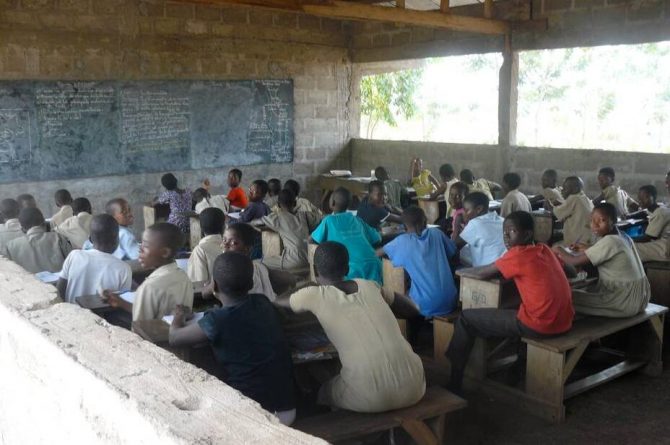 According to naturegnosis, there have been migration movements within Togo since colonial times. From 1955, farmers from the north (Kabyé, Nawdem) were specifically settled in the sparsely populated Est Mono areas northeast of Atakpamé. During the construction of the Nangbeto Dam and the construction of the Keran National Park in 1971, there were involuntary resettlement actions.

There is considerable temporary migration to Ghana, where seasonal workers find work in the cocoa plantations. Togoers also emigrate in search of work to the Ivory Coast, Nigeria, Gabon, Republic of the Congo, Libya, Lebanon, the Gulf States and even to Israel, where they are anything but welcome, like the film clip by Roni Geffen impressively shows. 23 Togoers were also affected by the violent clashes against Christians in Niger and had to be repatriated. Biggest magnet for rural exodus is the capital Lomé, as well as the other larger cities of Togo. Above all, the young rural population, who no longer sees any prospects in agriculture, settle in the Lomé metropolitan area in the hope of finding work.

During a meeting of the organization internationale pour les migrations – OIM in Lomé, the then Foreign Minister Elliot Ohin spoke on the urgent issues of migration movements and in the report available for 2015 it was found that around 25% of the total population had left their original region of origin. The number of refugees seeking asylum in Togo was around 11,000 at the beginning of 2019. Most of them come from Ghana, the Ivory Coast or Burkina Faso.

The Togolese government is well aware of the potential of the estimated two million Togolese people living abroad and is trying to involve the diaspora community more closely in its ambitious economic goals and has put its own diaspora website online.

The urban population in Togo was 42% in 2018. More than 20% of the total population live in Greater Lomé alone. On the website of the OCDE – Organization de Coopération et de Développement Économique, in the Atlas régional de l’Afrique de l’Ouest you will find the informative document on migration in West Africa, several themed articles with maps and illustrations.