Over a period of around 50 years, around one hundred Togolese authors came out with literary publications. The more than 200 publications are novels, short stories, poems, plays, autobiographies, as well as some works of literary criticism and dissertations on literary topics. Togolese fairy tales and legends were collected and published by Leo Frobenius (Bassar and Tem), Komla Agbetiafa and Yao Nambou, Fusseini Mamah (Tem) and Gerhard Prilop (Kabyé and Ewé). The tales of the Tem-Kotokoli of Kolowaré were collected and recorded in 2008 and 2009.

Félix Couchoro, born in Ouidah / Benin in 1900, is considered one of the pioneers of West African literature. In Togo, where he lived from 1939 until his death in 1968, he is revered as the father of Togolese literature, and a few years ago a library in Lomé was named after him. His first novel ‘L’esclave’, which he wrote in 1926, was published in France in 1929.

According to politicsezine, some of today’s Togolese authors are known far beyond the country’s borders, especially in France. The blog traversée de la littérature togolaise provides detailed information on new publications. The writer and playwright Kangni Alem has published various novels, plays and essays in France and maintains a blog. He founded a new genre, the Vodoun crime thriller. His novel Cola Cola Jazz was also published in German. In 2009, Kossi Efou received the Prix ​​Ahmadou Kourouma at the Geneva Book Fair for his novel Solo d’un Revenant and the Prix des Cinq continents de la Francophonie in October 2009.

There is a German translation by the novelist and essayist Sami Tchak under the title Scheiß Leben. In a detailed conversation with Etty Macaire, Sami Tchak talks about African and Togolese literature. Edem, a Togoer born in 1975 who now lives in Canada, had international success with his novel ‘Port-Melo’ (= Verlan). Théo Ananissoh, who lives in Bremen, published the novels ‘Lisahoé ‘, ‘Territoires du Nord’, ‘Un reptile par habitand’ and ‘Ténèbres à midi’ in France. Alabassa Worou, an author also living in Germany, published his first novel under the title ‘L’Arbre fétiche de Makassi’.

There is neither an art academy nor any state funding for artists in Togo. Apart from a few private initiatives, it was above all the Institut Français and the Goethe-Institut that offered the artists support and a forum. The hotel group ONOMO founded the label ‘ONOMO Visual Art’ with the aim of promoting young African artists who work in the fields of photography, video and image in the broadest sense.

One of the currently most important and most successful international artist is living in Lome Sokey Edorh we in the film see B. Fitzgerald at work in his studio near the Mont Agou. EL Loko studied with Joseph Beuys at the Düsseldorf Art Academy and lives in Cologne. Amouzou Glikpa studied sculpture at the Art Academy in Beijing and now lives in Wuppertal. Glikpa is also a painter and performance artist.

Kossi Assou, artist, designer and event manager, has now organized the international art festival Ewolé for the eighth time. The artist Prisca Hollemaert-Awadé commutes between France and Africa and is one of the few artists who received international attention. Gustave Akpéhou Djonda is a painter, sculptor and performance artist and has recently made a name for himself as a photographer. The designer Kossi Aguessy achieved his international breakthrough within a few years. One of the most famous draftsmen and caricaturistsTogos is Kokouvi Dodjivi Anthony, alias Dod-Zi, who also tackles taboo topics such as sex, religion, heads of state with his sharp pencil.

During the Gnassingbé Eyadéma era, the artist Paul Ahyi, who died in January 2010 at the age of eighty, received many public commissions (monuments, “art in architecture”) and was the best-known Togolese artist in the 1960’s and 70’s. The art historian Essoyodou Tchala wrote his master’s thesis on the internationally somewhat forgotten modernist Paul Ahyi. In Cacavelli, on the northern outskirts of Lomé, Paul Ahyi initiated a cultural center that is currently being converted into a museum.

The traditional sculptor Agbagli Kossi (1935 – 1991), who was inspired by the Vodun deities, left behind an extraordinarily impressive work that is also coveted by international collectors.

The Vogan painter Joseph Amedokpo also designed laptops for the American company Dell. In his spare time, the auto mechanic Didier Ahadsi in Lomé makes funny sculptures from sheet metal, which were also exhibited in Germany.

Anne Tismer, celebrated Berlin actress, has lived in Lomé for several years and does action art and performances here. 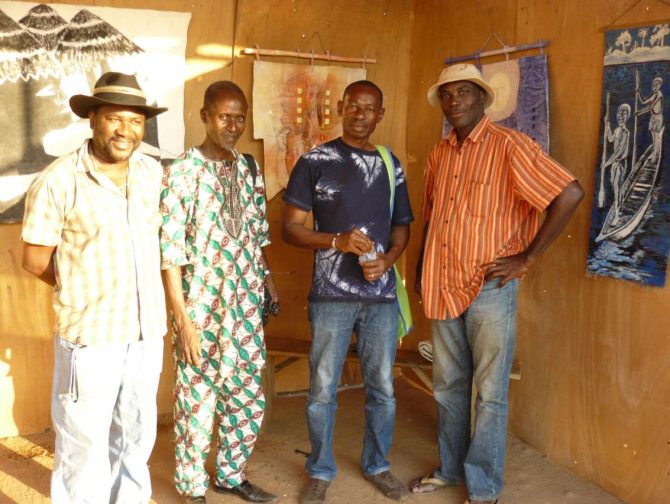